skip to main | skip to sidebar

The Yearling, 1946, should come with a disclaimer: "Animals were offed in the making of this so-called classic, which incidentally is shown regularly on Turner Classic Movies." And The Yearling isn't the only one. There's also Old Yeller and let's not even talk about Bambi.
These are the bring-downs of all time since in each one, an adorable animal is "killed", and why? So we can learn a life-lesson. So children can pick up some tips about "coming of age", though if they're like me, they're more likely to run screaming from the theatre and bear the trauma for life.
What was the point of these exercises in sadism?
Suppressed feelings perhaps, if you note the time when they were made. There was a cold war going on that you could feel even domestically. Toughness made you good. Kids could be kids but only up to a point and not for too long. And nothing could spell out the death of innocence like the death of an animal — the cuter the better. It's funny kittens didn't come in for it.
But there is a stunning exception to the use of animals as propagandistic devices in Leos Janacek's opera, The Cunning Little Vixen from 1924.
This has everything — talking, singing, dancing animals, gaiety, sadness, exquisite music that seems to have come from the very forest, and tears that have been earned.
— Lloyd Dykk
Posted by Lloyd Dykk at 9:16 AM No comments: 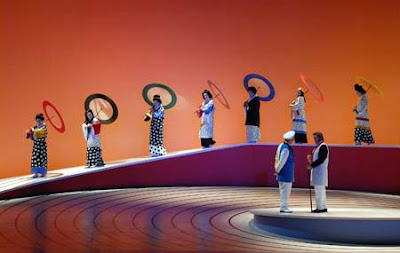 Vancouver Opera's big season-closing production is Puccini's Madama Butterfly, easily one of the world's top three favorites. Maybe because it is so overdone, the company decided to give it a difference, at least visually.
Musically it's very strong and the voices are good, though I didn't really care for soprano Mihoko Kinoshita's Cio-Cio-San, who never moved me; I much preferred Zheng Cao's Suzuki.
This is a very stark Butterfly, you could say almost an ungraceful one. The production designers have gone very Japanese on this conception but it's not a Japan from the turn of the century, it looks more like a set for Wagner as conceived by the Bauhaus school. A high rake to the stage, huge concentric circles, flat colored parasol-like discs carried by the geishas, a long slanting pathway, and screens, screens, screens with projections, projections, projections and five or six black-clad, square-headed bunraku figures to manipulate them "invisibly."
It looks very beautiful in a clinical way, and that's the problem. When was Madama Butterfly ever clinical? The production has erased every bit of charm from this great opera and left it a cold, beautiful thing. That was felt most significantly in the first act love duet between Butterfly and Pinkerton. There's so much going on in this overproduced "minimal" extravaganza that I hardly felt touched by the music at all.
Jun Kaneko, the designer of the sets, the videos and the unattractive costumes, is said not to have worked in opera before and, as preparation, to have listened to Madama Butterfly three times a day. Why would you need to?
ldykk@shaw.ca
Posted by Lloyd Dykk at 11:40 PM No comments:

On May 12, one of the best choirs in the country, the 12-voice musica intima (who are self-conducting and prefer the lower case) are holding a joint fundraiser to benefit the BC Cancer Foundation at Heritage Hall on Main Street.

They're co-presenting the event with Team Finn, named after Finn Sullivan, an adorable little boy who died at 3 of cancer. It's called "Run, Jump, Bounce, Dance, Sing, Smile, Love, and Ride," which seems to sum up Finn's philosophy.

The event is casual and starts at 7:30. You can meet the members of the choir and Team Finn in an atmosphere of cupcake tasting, music and a silent auction. Guests who purchase their tickets by Monday, May 10 will also be entered to win a special gift of their choice from Sikora’s Classical Records. Tickets are $50 and include one complimentary beverage.

And musica intima has just released a new CD called into light. It's stunning. It can be ordered from
http://www.musicaintima.org/listen/into_light/
ldykk@shaw.ca

Splinter in Your Eye 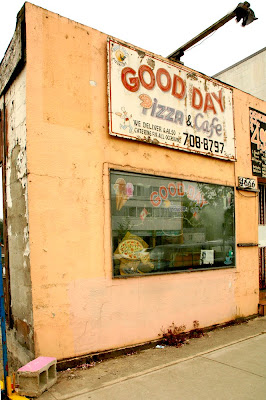 And now let us praise famous men. I adore the photographs of Lee Bacchus, a direct heir to the work of Walker Evans, who was a great Depression Era cameraman subsidized by the Works Progress Administration during the 1930s. In an age where so much loudly commands attention, his faultlessly skillful images have the grace to imply, to glance with their knowing immediacy, to reflect a meaning best taken in on the sly, though if you're like me, you will stare at them.

They are immensely subtle, beautifully composed, and often haunted by a sense of the past: Bacchus doesn't let you forget that the city is old. His photographs have a genius loci, a feeling that evokes a place beyond its physical location. It could be a barber shop while watching his son get a haircut, an old movie theatre with its detritus of worn out drawers, a tiny mouldering pizza shop with its crumbling ochre facade and its sidewalk weeds bravely poking out of a crevice, or it could be something as magical as a shot taken on the beach at Spanish Banks. The mysterious box washed up on the shore ... the pinprick of lighthouse light in the distance. This is a glimpse of infinity.

Bacchus is also an extraordinary writer. Check out his website at http://splinterinyoureye.blogspot.com/ 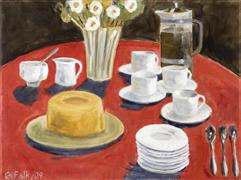 On Saturday a friend and I went to the Equinox Gallery for a showing of new work by Gathie Falk. There were a lot of people there because Gathie always attracts attention.
The critics Ann Rosenberg and Robin Laurence were among those who'd come. There were also Elizabeth Klassen and Tom Graff, Gathie's close friends from way back. I've known these three for a long time, back to the days in the early 1970s when I played cello and finger cymbals in a theatre piece by Tom called, I think, Portable Palestrina at the Vancouver Art Gallery -- one of his unforgettably strange theatre pieces. The song might have been an old, luscious Edwardian tune called It's Never Too Late to Be Sorry, which he sang in his big lustrous baritone that won him a place in the Metropolitan Opera auditions, which he couldn't go onto because as an American, he'd come up to dodge the draft.
Someone I knew back then once described Gathie, Elizabeth and Tom, who lived together in a house in Kitsilano, as "a houseful of elves." But that wasn't accurate and didn't begin to say what they were. Even then I recognized their unique brilliance. Being with them was as close as I'd probably ever come to knowing what it must have been like to be with the Sitwell clique -- Edith, Osbert and Sacheverell.
But there was an element of nuttiness to the Sitwells while Gathie is as sane a woman as you'll ever meet. No one I know has a greater eye for beauty and its infinite vagaries. She'd once made what she considered the perfect waffle and instead of eating it, nailed it to the wall over an archway and believe it or not, it wasn't funny. She was a potter at the time and produced a line of coffee mugs glazed in a mouth-watering color she called "rotten apple red." I longed to have some but was too poor to buy any.
Over the decades she's become an art star with her work collected by major galleries and museums. The most amazing thing about her is the range of what she produces and its absolute consistency of vision within its stunning thematic scope. Many of her pieces are epic in size (she calls herself a conceptual artist though I've never liked the term: what art isn't conceptual, excepting the butterflies and flowers of, say, the Ontario Watercolor Society, but that isn't art, it's mimicry).
Her new show is much smaller in scale, however. It's a collection of still lifes and there's nothing stiller or less magical about them for their littler dimension. Probably they could only be small, like the title piece, which shows a round table top bearing white cups and saucers, a plunger full of coffee, flowers, silverware and a dreamy looking chiffon cake.
It, and all the rest of her pieces, hum with a quiet sense of small pleasures magnified by an aura of, in a phrase that Gathie's used before, "a veneration of the ordinary."
ldykk@shaw.ca
Posted by Lloyd Dykk at 11:55 AM 1 comment:

Tax time. Which has made me feel like an idiot since I have a tremendous wide-eyed ignorance of anything financial, just as I have of all things related to the computer, which I naively persist in regarding as a tool. Actually, I seem to be its tool.
Why are people expected to be so in the know about fields utterly alien to them? Perhaps it's a life skill but these are skills I am absolutely no good at. At this point I should be saying, "I couldn't tell a ----- from a ----- or a ------ from a ------ but I'm too techno-illiterate to even think of examples. But specialists often seem so eager to impress you with their own technical expertise, even when it's in an area I'm not vaguely interested in. It would be like me rubbing it in someone's face that they don't know why a baroque trio sonata requires four musicians, not three. I would never do that and wouldn't even think it. It would seem more than a little ungenerous.
ldykk@shaw.ca
Posted by Lloyd Dykk at 1:16 PM No comments: 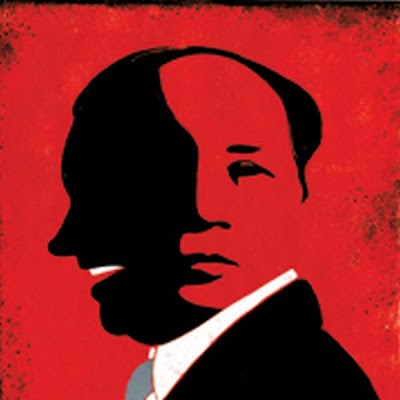 "The myths of our time are not Cupid and Psyche but characters like Mao and Nixon," said the American composer John Adams.
He was referring of course to his opera, Nixon in China, first performed in 1987 and having to wait, incredibly, this long for its first Canadian production, and we have Vancouver Opera to thank for it.
The situation deals with Richard Nixon's visit in 1972 to red China, until then a terra incognita, which in many ways it remains. Richard and Pat, Chairman and Madame Mao, Chou-En lai and Henry Kissinger are the subjects of some very strange music that bears a superficial resemblance to Philip Glass's motoric rhythms and ostinatos but in a decidedly superior way. Adams's is more subtle and variable, more deftly scored, more expressive, warmer but only up to an important point.
It serves to underline the alienation of some extremely alien circumstances.
The characters seem to have reached an entente by the end of the second act but it's an illusory one. Both sides are left stunned by a set of paradoxes in which they've found themselves—a parallel inscrutability which is echoed by Edel Rodriguez's wonderful poster.
The production is nothing less than superb and goes across the board: the direction of Michael Cavanagh, John DeMain conducting the Vancouver Opera Orchestra, the scenic design of Erhard Rom, the costuming of Parvin Mirhady, and especially the singing. Here we have the untouchable Robert Orth as Richard Nixon, Sally Dibblee as Pat, Tracy Dahl as Madame Mao, Alan Woodrow as Mao, ChenYe Yuan as Chou-En lai and the faultless Vancouver Opera Chorus, which has a very big part here. The audience was rapt.
Adams and his excellent librettist Alice Goodman are very generous to the humbly-born Pat Nixon, whose lines include memorably, perhaps prophetically, "I foresee a time when luxury evaporates into the atmosphere, like perfume."
ldykk@shaw.ca
Posted by Lloyd Dykk at 12:20 AM 2 comments:

Recent writing for other publications

Welcome to my new blog

I am still figuring out how this blog works and what I'm going to do with it. Meanwhile, email or phone me if you have ideas....

Where do you get your arts news?